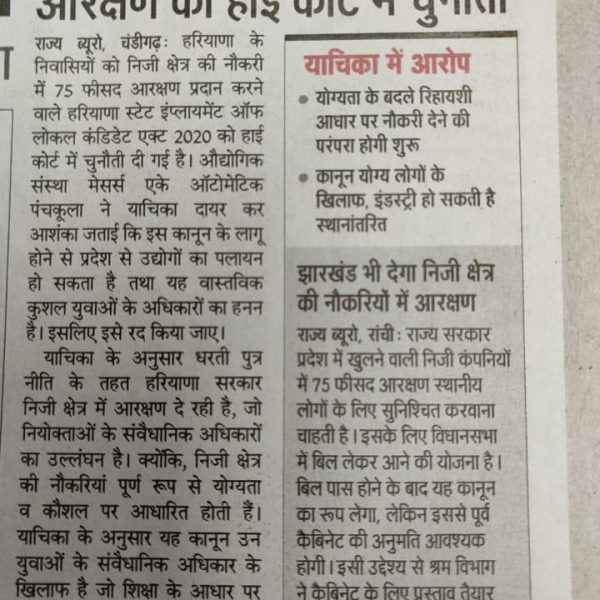 The Industrial Welfare Association Panchkula has challenged the Haryana law of 75% quota for local people in private jobs. A division bench of the Punjab and Haryana High Court will hear; the petition filed by an industrial body on 15 March.

The industrial body has challenged the law on the ground that the “son of the soil;” wants to create reservation in the private sector by introducing the Haryana government policy. The petitioner states that the law is a violation of the constitutional rights of employers as private sector jobs are purely based on skills and are an analytical mix of the minds of employees; who are citizens of India who choose their jobs to select jobs They have constitutional rights on the basis. In any part of India.

The petition states that 75% reservation for local people in private jobs is an attempt; to introduce a domicile method for securing jobs in the private sector based on potential employee education; skills and mental intelligence, which is currently anarchy. Will create industrial employment structure for industries in the state of Haryana.

It has been argued by the petitioning body that the reservation law is contrary to the central government’s ;”Bharat Ek Bharat Shreshtha Bharat” policy under which there is to be a unified and mobile labor market within the country.

The petition states that the law will also impede the Kovid-19 recovery of the private sector; and force some private sector units to relocate their offices to other states.

The petitioner has also argued that the law notified by the state government is an act of unfair competition between the qualified employees of Haryana and the local residents who claim rights as an employee on the basis of local residence.

Fulfills the requirement under Articles 14, 15 and Others

It is also submitted that the law is unconstitutional and cannot constitute a legal inquiry as; it fulfills the requirement under Articles 14, 15, 16 (2) and 16 (3), 19 (1) (g), 21 Violates the principles of the constitution.

The High Court informed that a bench headed by the Chief Justice would take up the petition for hearing on 15 March. The petition includes Principal Secretary, Labor Department and Haryana Labor Commissioner as respondents.

Recently, the Haryana government has approved a new law that will provide 75 percent reservation; to local candidates applying for private sector jobs in the state who pay less than Rs 50,000 per month. The Haryana State Employment Local Candidates Act; 2020 will apply to companies, societies, trusts, limited liability partnership firms, partnership firms etc. located across the state.

No Comments on 75% reservation in private sector jobs challenged in high court.